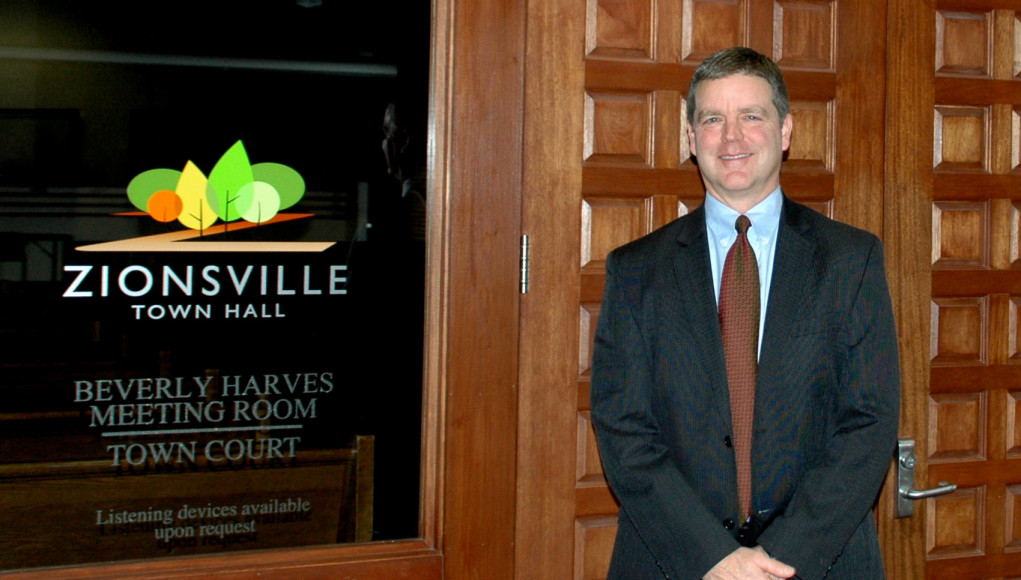 As I mentioned in my previous post about the history of Boone County, I was hoping to be able to interview Zionsville’s first elected mayor, Tim Haak (pronounced “hawk”). A few hours after I left a voicemail for Ed Mitro, the Town Manager, to try to arrange a meeting with the mayor, I received a return phone call from the mayor himself. I must admit, I was surprised and impressed by that.

(I also stated in my previous post that I would mention the helpful staff members at Town Hall who greeted me in a very warm and friendly fashion, when I first attempted to photograph the mayor’s office. So, “thank you” to Janice Stevanovic, the town’s Assistant Planner, and Chrissy Koenig.)

Below is the transcript of my interview with Zionsville’s first-ever elected mayor, which took place in his office on Monday, January 25, 2016—the first business-day after the Indiana Supreme Court ruled to uphold the merger of Zionsville and Perry Township. It was a busy morning for Mayor Haak. Just prior to meeting with him, he was interviewed on camera by WRTV, so I appreciate his willingness to give this site the same access he provides to the established news media.

KZ: With the focus of our site being first-time home buyers, who would tend to be couples in their 20s and early 30s who have young children or are planning to have children, what do you believe are the main reasons those couples should consider Zionsville as the community in which to plant roots and raise a family?

Mayor Tim Haak: Well, there are lots of reasons. I think, because they’re going to be starting a family, they’re looking at schools. Zionsville has some of the top-rated schools in the state. They’re looking at parks. We have 17 parks. We were one of the first communities in the state to develop a pathway system. We’ve got an extensive and mature pathway system that can take you anywhere in town. Home values are stable and steady. The return on your investment is going to be good. We’re walkable, we’ve got a nice small-town core, we still have a nice village feel and sense of community. So, there are lots of reasons I think someone would think about Zionsville when they’re buying a home, whether it’s their first or their second or their last.

KZ: You grew up in this community since the age of nine and graduated from Zionsville Community High School. What are some of your favorite memories of growing up here?

TH: Some of my favorite memories are Lions Park, which hosts a wide-variety of things, including Fall Festival. Little League is conducted down there and I played youth football there as well. It’s close to downtown and I can remember when I was a kid, when our baseball games were over, we’d pile in the back of my Dad’s pickup truck and he’d take the entire team up to Dairy Queen for ice cream. We’d ride our bikes all throughout town and we’d visit McKamey’s Pharmacy, which had an old soda fountain in the back and you knew everybody in there. McKamey’s might be gone, but the town still feels the same.

KZ: Now that the Indiana Supreme Court has ruled the merger with Perry Township is final, how will that geographic expansion and the change to the form of government that manages the community—specifically, adding a mayor as the chief executive—impact the quality of life that was established a long time ago and has been maintained to great success?

TH: Geographically, I think the only difference you’ll see is that the borders are going to expand. The residents that live in Perry Township will now have the ability to elect a representative to the town council and they’ll be able to vote for the office of mayor. They’ll have direct access to those offices. The town’s Department of Planning will have jurisdiction over the former Perry Township area, so they’ll now have a lot more representation and input on their part of Zionsville. The intention is that they want this area to remain agriculture and residential, and we intend to honor their wishes.

KZ: Does that area remain Perry Township or does it become Zionsville?

TH: They are Zionsville.

TH: They go to Lebanon. The school district boundaries are not the same as the town’s boundaries. They are totally different entities, so the school boundaries will not change.

KZ: Do you have any desire to make that change moving forward?

KZ: Zionsville has recently been named the safest city in Indiana by the Consumer Affairs organization, as well as the safest city in America in some statistic-based surveys, and its school system is considered perhaps the best in the state by several ranking sites. It seems as if the town has nowhere to go but down.

[The mayor let out a hearty laugh at this statement.]

KZ: As the community’s first elected mayor, that puts a lot of pressure on you.

KZ: What is your agenda to maintain its elevated status and to make life even better for the residents of Zionsville and the businesses located here.

TH: It’s just going to take one crime and boom, we’re number two. [We both laugh.] Well, our police force has always been part of the community. A large number of our officers live in the community and they’re active. Our police chief has spent his whole career in Zionsville, so he’s very familiar with the residents in town. We’re all neighbors. I think we all know some of the police officers by name. We have a strong sense of that community and we look out for each other. If we see something that may not be right, we call our neighbors and we ask questions.

KZ: It’s as if the “If you see something, say something.” motto has been in effect here for quite a long time.

TH: Yes. It’s not that people here are nosy, but if they see something that just doesn’t look right, we try to fix things. It’s not necessarily criminal activity, but if something can be improved people reach out and feel comfortable doing so. The mayor’s role will include people having someone to contact. They’ll know who is ultimately responsible in town to get their message, to hear their voice. There are seven members on the town council, so there could be some ambiguity as to who to contact or what office to call. People know the mayor is the executive of the town and they can reach out directly to this office, so we can work together to solve any problems we might have.

KZ: So, has your phone been ringing off the hook since you took office?

TH: No, not really. [Laughter] I had one call when it snowed, but that was it. I’m glad I’m not on the East Coast right now digging out of three feet.

KZ: Can you tell us a little bit about the plans to move Town Hall?

[The mayor pulls out a printout of a Google Earth satellite photograph of the Town Hall property to illustrate his answer.] 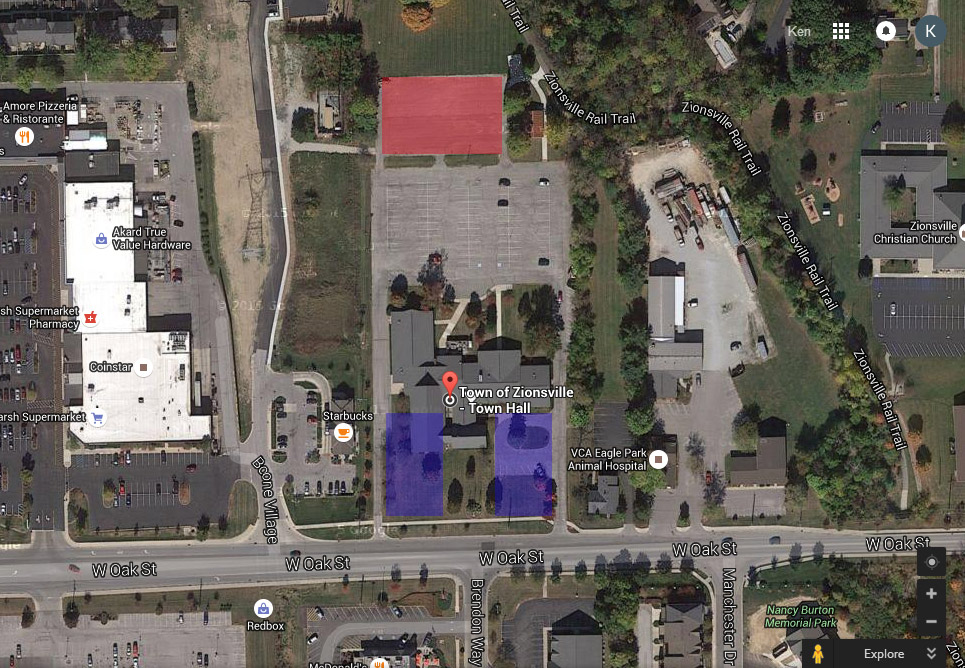 TH: Our desire is to build a new Town Hall in the space at the very back of our parking lot {area shaded red}. Then we would install a center drive [from the street to the existing parking lot].

KZ: You would remove the existing building?

TH: Yes. This building, which is a refurbished church, is obsolete. We would sell off the front part of the land and open it up to commercial development—ideally two buildings {areas shaded blue} to help with our commercial tax base. We’ve outgrown this building. It’s inefficient and mechanically it costs too much to make it worthwhile to stay in it.

TH: It is not green at all.

KZ: It looks like the footprint is considerably smaller than the current building. Will it be a two-story building?

TH: It’ll be a two-story building; approximately 40,000 square feet. Square-footage-wise, it’s a little bigger than this one, but it’s going to be managed a lot better than this one.

KZ: And the courtroom will be in that new building?

TH: Yes. All current functions that are in this building will be in the new one.

KZ: When will that happen?

TH: Ideally, we’d like to start constructing this spring. It’s about an 18-month process.

KZ: Finally—and this question is rather premature considering you took office on January 1st and it’s only been one business-day since your job was actually deemed legal by the courts—do you see your current job as a stepping-stone to other elected positions on a state or national level, or do you see yourself eventually returning to the business sector?

TH: After my fourth week of technically being here, I think this is my last job. I have absolutely no desire in the political world, state or national. I don’t view this as a political position either. I think this is an executive position, like a CEO would run a company. That’s how I view the role as mayor, so I have no other desires. I don’t like politics.

KZ: Your term is for how long?

TH: I’m not that old. If I were not re-elected or choose to not be re-elected, I would return to the private sector; the business community.

KZ: Are there any other thoughts you would like to convey to potential Zionsville first-time home buyers?

TH: It’s a great community. We have a lot of active civic organizations and we have a very active Chamber of Commerce. They’re welcome to reach out to anybody with questions. I know that first-time home buyers do contact the schools, typically with questions about what school they would be attending, if they want to attend a certain school, or where the Zionsville school boundaries are. If they have questions about future development, they’re more than welcome to call us or to meet with us. We’d be happy to talk to anybody about where new neighborhoods are proposed and what the future might hold for certain areas of town. We’d be happy to do that.

Lions Park: The Center of Community Life in Zionsville

The History of Zionsville. You May Be Surprised at How...