Home Community The History of Zionsville. You May Be Surprised at How It... 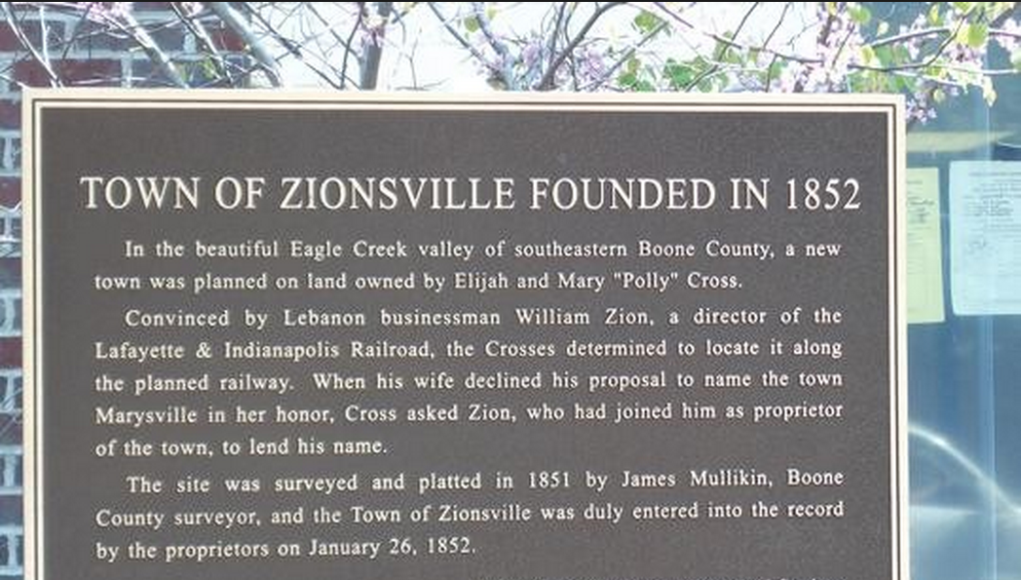 Located in the far southeast corner of Boone County, Zionsville was named for William Zion an early settler and pioneer of Lebanon, Indiana, located at the very center of the county and the seat of county government.

Written in 1887 in his book Early Life and Times in Boone County, the author Samuel Harden told of the virtues of Boone County: “It’s central position, (within the state of Indiana) excellent soil, water power, and other advantages, natural and improved, ranks it among the first counties of the state.”

From the beginning Zionsville and Boone County have been seen and noted as a unique place to call home.

For about 60 years prior and until 1828, a fraction of the Miami Indians occupied the northwest corner of Boone County. It was around 1822 that white pioneers first settled in Boone County finding “an unbroken wilderness, no roads, no mills, deep-tangled brush and vines, and a good portion of the land covered with water.”1

Very shortly after white pioneers made their way to what would become Boone County (1830), the settlement of what would be Zionsville began in 1823.

When William Zion and his wife made their way to Lebanon, Boone County in 1834 it was said to be only a crossroads. Named for Daniel Boone, Boone County had only been founded four years prior to Zion’s arrival with a population of 622.2

Zion was an active member of Lebanon; a business man and mercantile owner.

By 1885 there were 135 school houses and 9,788 school children. Roads and railroads criss-crossed the county. Twelve townships were delineated and cities sprung up and grew across the county.

Of the 12 townships, Eagle Township occupied the southeast corner of Boone County. Among any pioneers that first settled this township, one of note was David Hoover.

The first marriage license of Boone County was issued by Hoover for his daughter, Mary “Polly” Hoover. Elijah Cross and Polly Hoover were the first to be married in the county in the winter of 1831.

Much of Eagle Township’s early business life was conducted in and around Hoover’s home known as Eagle Village or Eagle Creek country.

Upon Hoover’s death in 1835 Mary and Elijah Cross inherited Hoover’s land and farm; an 80-acre homestead. At this time Eagle Village was a thriving community.3

In 1849 promoters of a railroad between Indianapolis and Lafayette were busy encouraging the organization of towns along the intended route. William Zion was one of the promoters.

Zion, a member of the Board of Directors for the proposed railway, had already founded Hazelrigg Station northwest of Lebanon. He saw the need for another station between Whitestown (an already established town) and the Boone-Marion county line – halfway between Lebanon and Indianapolis.

Zion convinced Elijah and Polly Cross that a town should be founded on their land in Eagle Township. The Crosses agreed and Elijah and Zion became partners as proprietors.

Zionsville was a town founded upon “the completion of the Indianapolis, Cincinnati & Lafayette Railroad in 1852.”7 Together Zion with Elijah and Mary Cross laid out and platted Zionsville on the Cross’ land “just below and west of where Big and Little Eagle Creeks unite.”

“…in 1852 when Zionsville sprang up one mile farther west. This was the death knell to Eagle Village.”9

Zionsville was almost named Marysville. However, when Elijah asked his wife to agree the town be named in her honor, she declined. Elijah extended the offer to his partner, who accepted. Zion never owned any land, nor ever lived in Zionsville.

With the town’s founding on the heels of the railroad completion, Zionsville grew hastily with “residents, merchants and tradespeople….bringing their houses or shops with them.”11 Literally the new residents brought their buildings with them…”Christian Church which was dismantled at Eagle Village and rebuilt on the northeast corner of present Hawthorne and Second streets.”

Many of Zionsville’s best attributes can be traced back to its beginning. The words of author Samuel Harden from his book published in 1887 reflect the past and eerily traced a trajectory for the Zionsville we know today.

“Zionsville contains many handsome residences and business houses, and is the center of a good country, consequently has a fine trade in all the various departments.”

“An excellent school house was built her about the year 1860; it is one of the finest in the county, pleasantly located on the hill west, overlooking the town.”

“Take all in all Zionsville ranks above the average as to its beautiful location, business enterprise and the social and moral character of its inhabitants.”

“The Zionsville Times, now published by Col. Galt, is one of the best papers in the county, recently enlarged to an eight-page paper, wide-awake in its make up, has a good circulation and is ably edited.”

“To the writer Zionsville and vicinity has a peculiar interest. There he learned to swim and fish in the classic waters of the Eagle;….”

“The town is well supplied with shade-trees, and the streets and sidewalks are generally in good repair.”

“…and, more than all, there is an interest attached around the beautiful little cemetery, just south. Here my parents, two sisters and a brother ‘quietly sleep, their toils forever done.’ “